A new insight into
THE ORIGIN OF RELIGION
by Benjamin Andrews
based on the latest findings in Archaeology, DNA research and Neuroscience

Have you ever wondered about the origin of religion? I don't mean the origin of the existing religions because they evolved quite recently in the history of mankind. What about religion before writing was invented. What about the "cave man's" religion. What started the beliefs in something intangible. I have.

There are many books written on the subject and some very intriguing ideas are to be found in them but perhaps the explanation, by applying Occam's Razor (a line of reasoning that states that the simplest explanation is often the most likely one, although not necessarily the correct one), might be less complicated than generally thought. In the following pages I will explain some of my thoughts which have evolved over many years after reading many books and articles on the subject. I intend to avoid academic jargon when expressing my ideas. I will also welcome your opinion and reactions to this website.

Why am I writing about this subject? I feel it is very important that we have a close look at the fact that religion does not evolve with the fast changing societies due to the scientific advances and greater understanding of the universe around us. That is creating tremendous problems and we must come to a better understanding to improve our society and clinging to ancient rules and superstitions is not working very well.
This is not a scientific explanation regarding the origin of religion. It is however a common sense approach while trying to avoid the common pitfalls of “beliefs”. I was brought up in the Dutch Reformed Church and always questioned the dogma of the religion. Now in my seventies after having done a lot of reading, discussing and research I have not only become an "unbeliever" but also I understand how religion could have developed and was instrumental in helping people cope with the vexing problem of living in a “tribe” when primitive drives were detrimental to the group as a whole. I am not trying to preach or convince people that religion is wrong but simply make you think “outside the box” of what possibly could be a common sense explanation of the development of religion. Hopefully it gives an insight of why we must have a closer look at the advantages and disadvantages of the current religions and start thinking what philosophy we must evolve to replace the disadvantages while retaining these parts which are positive in the modern world. (Not throwing the baby out with the bath water).  If we ever succeed in doing that, this philosophy must also not become dogma but should be constantly updated as our culture changes and develops in the future. I have no illusions that this can be accomplished in anyone’s lifetime. It will take a long time but we have to make a start. My hope is that this writing will help many people understand that religion is a man-made phenomenon and not a Deity inspired “law” that must be religiously followed. If there is such a “Deity” there would not be so many different interpretations of the “Word of God”.

When you read this do not automatically reject these ideas because they seem to be at odds with your beliefs. Please keep an open mind. 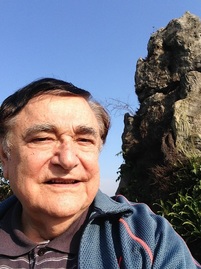 ​Benjamin Andrews was raised in the Dutch Reformed Church as a boy in Holland, and moved to Canada as a young man. After retiring from his career as a high school teacher, he began a website to explore and discuss the role of religion in modern society and to encourage people to think outside the box. He lives with his wife in Barrie, Ontario.
SYNOPSIS

·      Early humans realized, that heavenly bodies, the Sun and the Moon caused seasons and tides, thus Astrology was born.

·      Natural forces governed their lives, the wind, earthquakes, volcanic eruptions, objects falling from the sky, were thought off to be caused by invisible entities.

·      The wind was the most important and considered the life force (spirit) because it entered the body at birth and left the body at death to rejoin the Great Spirit. Deprivation of the spirit (breath) caused death in minutes for every breathing animal.

·      The Gods (natural forces) were endowed with the characteristics of the Kings and Emperors who were almighty, all powerful and infallible.

·      Religion developed because humans tried to address and influence the gods and created rituals to do so. This probably did help to make people believe they did have some control over the natural forces and this was important to the survival of the tribe. The leaders also used it to control the behavior of the group.

·       Ancient myths and stories are based on actual happenings or moral tales, which before writing, were passed on by storytellers and shamans and therefor changed and were embellished and distorted to suit, until finally written down.

·      Before writing, morals (rules to provide a means to live together peacefully in the tribe) adapted to circumstances.

·      Because of the invention of writing, these morals are now “written in stone” and have become very difficult to change to adapt to the changing society and are the cause of the many religious conflicts we are facing today.