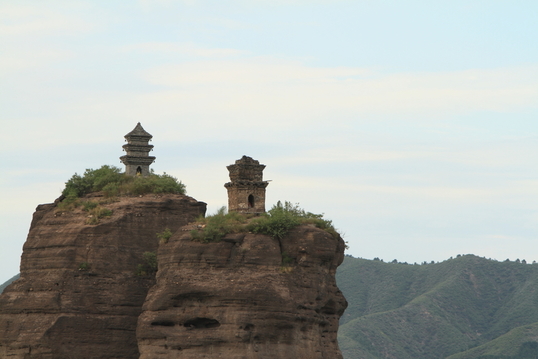 Many strongholds were built on top of mountains. They were the dwellings of the masters. These masters were likely originally associated with “Gods”. Mountains in China are still often referred to as Gateways to Heaven.  Only the devout followers of the master(s) were allowed to enter these  “Safe Havens”. Zeus and the associated Greek gods and goddesses lived on mount Olympus. The Khmer gods lived on top of a mountain. Moses climbed the mountain to be nearer to God and “received“ the Ten Commandments . Prophets and sages often meditated high up in the mountains to communicate with the gods.

The National Geographic News of Oct 28,2010 reports the following: ”The first effect a climber will notice upon reaching higher altitudes is an increased breathing rate. Any exertion, even eating a meal or crawling into a sleeping bag, leaves climbers short of breath. The heart rate also soars, as high as 140 beats per minute, and blood thickens, increasing the possibility of clotting or strokes. These physical reactions are the body's way of combating oxygen deprivation, also known as hypoxia. Climbers suffering from this acute mountain sickness have been known to chat with imaginary companions, see strange visions, and lose touch with reality”.

The Mighty Spirit, the wind, dwelt high up in the sky as well so the idea that Heaven was somewhere up above seemed a logical conclusion.

The practice of burning offerings is also an indication that, since the offering is mostly transferred to the rising smoke, it was considered a method to send things to Heaven, hence many rituals of burning offerings on an altar were practiced all over the world. Many Chinese still burn a “special” type of paper money to supply their ancestors with a means of acquiring things in the hereafter. Bodies are burned in some countries to release their remains from the earthly bonds and join the Great Spirit.

Hell, the everlasting fire, was associated with underground volcanic activity. When a volcano erupts it spews “ fire and brimstone”. The smell of sulfur is also associated with Hell.  Volcanic  explosions were seen as punishment from the Gods so the belief that when the body was burned in lava it dissolved in the liquid fire and therefor would not proceed to heaven is understandable.  Lava bursts from below the surface so that’s where the location of hell is thought to be. The concept of an everlasting fire was introduced by the Church and is not a Biblical concept.

BIBLE TRANSLATIONS
To those who believe that the Bible is God’s word and cannot be questioned, one should ask which translation is the correct one. There are over 40 different English translation (see: biblegateway.com a christian website which facilitate Bible research). I research the concept of “hell” and found out that actually the common concept of Hell is totally misunderstood. There is no reference to this concept in the OT. The old text refer either to “sheol” meaning grave which is “hades” in the Greek versions means a place of forgetfulness.  Sometimes there are references to the Valley of Hinnon, A place outside Jerusalem were trash was burned. Many translations use “hell” so that it seems that our modern concept of hell applies. Not so, according to the Greek or Hebrew versions. In the NT the older versions refer to “Gehenna” also translated as “Hell” in many versions Gehenna is similar to the “Valley of Hinnon” mentioned in the OT. It is a place where in the OT children were sacrificed and dead people burned, this valley is recognized as a burning trash heap in the NT. (biblegate.com , look into the Expanded Bible version, EXB). The Gehenna was always burning but the bodies were totally destroyed. The eternal punishment concept was added to the early church to  persuade their followers not to leave the church but to encourage them to stay and convince others to fear God and join. A very successful move if you look at the results today. The punishment for the original sin (Genesis) was death instead of eternal life. Not eternal punishment. If one still want to believe in heaven one can take comfort that hell as eternal agony was never part of the original bible.
When God spoke to Adam and Eve after they ate from the tree, he said (Gen 3: 19)
By the sweat of your face, you shall get bread to eat,
until you return to the ground from which you were taken.
For you are dirt and to dirt you shall return.
This says nothing about eternal punishment or Hell. In the last part of Gen 3:21  God says
The man has become like one of us, knowing what is good and what is bad! Therefor, he must not be allowed to put out his hand to take fruit from the tree of life also and thus eat of it and live forever.
These two passages, if you believe the Bible is he word of God, clearly states that the punishment is to forego eternal life and that you die and become dirt, again there is nothing stated about eternal punishment.
There is another contradiction here. If eating from the tree makes you live forever “thus eat from it and live forever” Adam and Eve should live forever but God is punishing them by taking that possibility away.
The conclusion is clear. The punishment is: "no eternal life, but death", not "eternal burning in Hell"