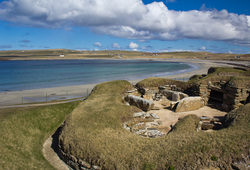 Geneticists studying the DNA of today’s world population have discovered that Homo sapiens went nearly extinct sometime between 195,000 and 123,000 years in the past.  Since today’s humans show a very low genetic diversity it is most likely that every human alive today can be traced back to the same small group of survivors of that period. According to the research by Curtis W. Marean, a professor of archaeology at the Arizona State University and the associate director of the institute of Human Origins, this small group of survivors, perhaps as small as a few hundred individuals, lived along the south coast of Africa, rich in shellfish and edible vegetation. This group of our human ancestors showed remarkable abilities. They recognized that they could change raw material by heating and could execute a long chain of processes to make the tools they needed. These processes were passed on to the next generations. In a 2010 article in Scientific American, Marean explained how anatomically modern humans survived the MIS 6 glacial stage 195-123 thousand years ago, a period during which the human population was limited to only a few hundreds breeding individuals. During this period, sea levels dropped more than a hundred meters and the sloping South African Agulhas Bank was transformed into a plain on which humans could survive on shellfish and wash-ups from the sea. 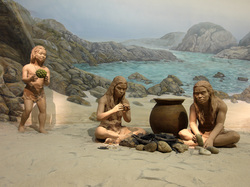 They lived on the coast and must have understood the rhythm of the tides since they would gather the shellfish at low tides. Some clever individual might have noticed the connection between the moon cycles and the tides and could predict when it was time to go back to the shore to gather the shellfish. Those astute observers would be important individuals and become leaders of the tribe. This would eventually become the start of the knowledge that there was a connection between heavenly bodies and the happening of events on earth.  The observation that the sun and the moon influenced what happened on earth and that that knowledge could be used to predict future happenings evolved into astrology
Obviously, because of their cognitive abilities, humans looked for such signs in their environment to predict the future. And eventually when they spread out through the world they learned to predict many events such as seasons, weather and even calamities such as floods and other disasters. They wanted to explain why things were happening and invented explanations for events that they did not understand.  The individuals who could predict some things would not always be correct but one could always blame an external force  (gods) when things would not pan out. We find that phenomenon still happening to day  (It’s God’s Will)

During the ages before any written language was invented, the “knowledge” was passed on from generation to generation by song and dance and storytellers. Shaman would train their offspring or pupils. The experience of eating certain plants, herbs and animals resulted in the knowledge what was beneficial and what was to be avoided. Deceases also were experienced and men learned to avoid some behavior to minimize the exposure. Because of the lack of permanent records this knowledge must have evolved in fits and starts and therefore progress must have been very slow. When finally written down in “recent” times these rules became the “laws” which governed food and behavior.  Yes, the last 8000 years, are recent compared to the previous 100,000 to 200,000 years.

I will use the word Shaman for the leader who used his knowledge and cunning to impress the rest of the tribe. They would see this person as having supernatural powers. They were not necessary the “military” leader of the tribe since that calls for a different type of leadership. This might explain why we still live with this dual leadership of Military (political) Leaders and Religious Leaders. Some are successfully cooperating but some are in a continual struggle for power even today. Religious Leaders have the advantage of claiming the support of a Supernatural Power. Although before these “laws” were written down they could be adapted to new knowledge and experiences, they are now written “in stone” and are much more difficult to adapt to new developments and situations. We are currently constantly struggling with people who believe that those written rules, although written by humans, are inspired by “God” and they therefore are the absolute truth. It will take a long time before all of humanity will overcome this “belief” and realize that we must adapt to the evolving new knowledge.