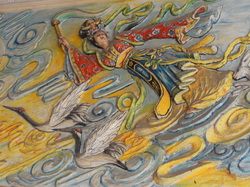 Ancient myths are not always fictional stories. They are most likely based on actual happenings which were told and retold, embellished and distorted through the ages before written language finally recorded them. If one reads the Greek Mythology then one realizes that although they are stories about “gods” they are most likely human stories of the powerful people who were in charge of the world in ancient times. Euhemerus (320BC) already suggested then that “gods” developed from legends about human beings. The family feuds, the murders, the power struggles between the “gods” have the same characteristics of the powers struggles of Kings and Emperors in the times of recorded history. Some of these “stories” were also rewritten to suit a later time.  The New Testament of the Bible has stories which echo older Egyptian myths such as the story of the god “Horus” which has much in common with some of the Jesus stories. Some of those myths might indeed be wholly invented as well, and written as warnings or moral stories such as the parables in the Bible. Tales of empresses, who were left childless when their husbands died and because of the wish to hold on to power, became pregnant after the fact, claiming that they were impregnated by the departed “god” who came down from heaven for that purpose, also show that “virgin” births were part of the folklore.

Let me tell you a story. For hundreds of thousands of years humans roamed the steppes and savannas to gather and hunt for food. Not too long ago, perhaps 10 000 years ago the first settlements took place. One tribe under a particular powerful leader established a kingdom. He gathered around him his most loyal subjects who became the liaisons to the rest of the tribe to issue the directives and orders from the King. Let’s call them “Ministers” or messengers from the King. This king was all powerful and his directives could not be questioned. He was infallible. Then one of the ministers coveted the power for himself and staged an unsuccessful coupe. He failed but escaped with some of the followers who had supported him. Subsequently he established a kingdom of his own and to consolidate his power he send messengers to the old kingdom to entice them to leave the old kingdom to join him and strengthen his position. These two kingdoms are now perpetually at war and are tugging between them for the loyalty of their followers. The first Kingdom of course claiming that the other is the evil one.

This is a very likely scenario and this “story” might have been retold and embellished throughout the ages before written language. Now substitute the word “God” for “king” and “Devil” for the rebel and “angels” for “Ministers”. What story do you get?

Isaiah 14:12-15 referrers to the enemy King of Babylon as the Devil. Revelation 12:19 Visualizes the Devil, Satan, the Dragon and the Serpent as being one and the same. What is also interesting is that in China at a Dragon festival I noticed that the “dragon” is actually portrayed as a snake. There is obviously a connection between Chinese legends and the legends in the Bible. In China the Dragon is the good guy! Is the snake in the Garden of Eden also the Devil?